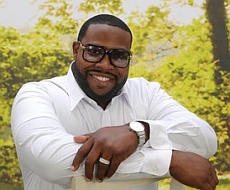 Through solemn meditation, he hears the whispers and submits to the powerful voice of GOD -- the voice of divine calling, direction which ignited a burning fire which had consumed the Prophet Jeremiah has now in like manner engulfed him. That divine calling to purge, prepare, teach and preach the Word of God. The knowledge and wisdom given to him by the unction of the Holy Ghost continues to reveal, impart vision, manifested in him to reach astronomical altitudes for the kingdom. This vessel brought from a spiritual existence manifested itself through an incarnate drama in the personality of Pastor Maurice A. Flaniken. He is saved, lover of people, humble, mentor, author, teacher, leader, compassionate, man of integrity, faithful, and loving man of God. He was born on February 28 in Detroit, Michigan. Pastor Flaniken is the loving husband of LaShonda U. Flaniken. He at last fighting against the odds of various inner city youths graduated with honors from the Charles E. Chadsey High School, magna cum laude.

Maurice was trained in the fear and admonition of the Lord therefore, he confessed Christ at an early age and was baptized November 1998 at the St. Phillip’s Missionary Baptist Church in Detroit, Michigan. This was under the leadership of Pastor Theron Hodges Sr., and Interim Pastor David E. Washington Sr. It was under their ministry he was summoned to the Gospel Ministry in 1999. On, July 18, 1999 he preached his trial sermon, from the subject P.U.S.H., Pray Until Something Happens, Acts 12:1-8. He was also licensed a Preacher of the Gospel, that same year. In 2003, he united with the Greater Faith Missionary Baptist Church under the tutelage of Reverend Frank Robinson Jr. In 2004, he received the Macedonian call from his longtime mentor Pastor David E. Washington Sr., and after much prayer he united with the Shiloh Baptist Church in Pontiac, Michigan. In July of 2006, Pastor David Washington Sr., and the membership of Shiloh Baptist Church ordained him a Preacher of the Gospel. While serving at Shiloh he has served in various capacities including Assistant Pastor and in July of 2014 he was elected to serve with great honor as the fourth Pastor of Shiloh Baptist Church in Pontiac, MI.

Pastor Flaniken, has certifications in basic and advanced Public Service Chaplaincy from Macomb Community College Criminal Justice Training Center. He also holds a certificate from American Association of Pastoral Counselors as a Pastoral Care Specialist, he is a certified instructor for the National Baptist Convention Inc., and is a certified Stephen Leader. In August 2017, he was crowned a Sovereign Grand Inspector General, thirty third and last degree by, the Ancient and Accepted Scottish Rite of Freemasonry United Supreme Council in New Orleans, Louisiana.

Maurice has a burning desire to work with community with several organizations. He is an executive board member of Council of Baptist Pastors of Detroit and Vicinity, Co-Chairperson of the political and social actions committee, executive board member of the Coalition for Black and Jewish Unity. He is also a Lifetime member of the NAACP where is serves in on the Religious Affairs Committee and a member of the Southern Christian Leadership Conference. He is an, alumni of the prestigious FBI Citizen’s Academy. He has been appointed by the Sheriff of the Wayne County Sheriff’s Department as a Sheriff Chaplain. Additionally, he also an affiliate of the 21st Century Chaplains Network, and Board Member Trinity Park Inc. To God be the Glory!